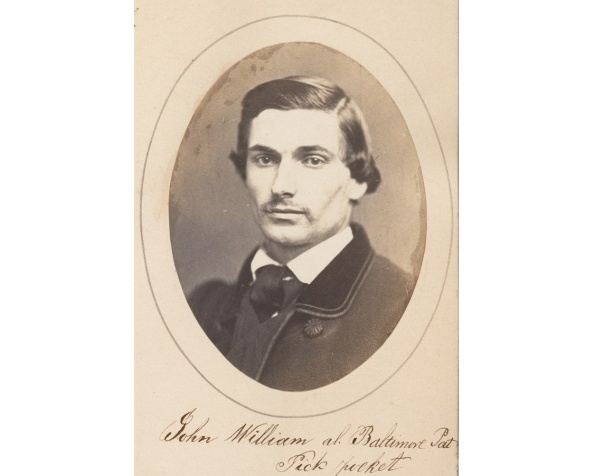 A lady slipped on the pavement in a street in Philadelphia and was aided to arise by a very polite gentleman. She thanked him kindly and was struck by his handsome eyes, which haunted her until she missed her pocket-book and discovered through the police that a noted pickpocket known as “Baltimore Pat” was their owner, and that his attentions were part of his daily duty of “buzzing.”

Imagine her embarrassment, not to mention discomfort, when she lost her footing and fell to the ground on a busy city street. Like every well-off woman in 1860, she wore a tight corset and an unwieldy hoop skirt. How did she get up without entirely losing her dignity?

Her tears were on the verge of overflowing when a young man came to her rescue. He leaned down and offered her his arm. She gratefully accepted and he easily pulled her to her feet. He smiled at her and asked if she was all right. With a blush she answered that she was fine. He nodded his hat, wished her a good day and vanished into the crowded street. She brushed off her skirts, reinstated her dignity and continued to her destination.

She arrived at the shop and selected an item to purchase but she couldn’t find her purse anywhere. Embarrassed, she left and went to the police station where she reported that her purse had been stolen. The police told her that she’d been “moll-buzzed” and showed her some photos in their rogues’ gallery. Suddenly it dawned on her why the striking-looking man had been so helpful. She pointed to a photo labeled “John William, alias Baltimore Pat.”

Pickpockets who specialized in preying on women were called “moll-buzzers.” Baltimore Pat’s good looks no doubt helped him professionally. Numerous articles describing his thievery and arrests appeared in newspapers between 1857 and 1862.

The arrests didn’t slow him down. He worked on trains and streetcars — a pickpocket’s paradise — where people were crowded together affording plentiful opportunity for stealthy theft. Allan Pinkerton warned about moll-buzzers in his 1884 book Thirty Years a Detective.

The scene is an ordinary street car, and the seats are all occupied. The thief enters and at once takes up his position immediately in front of the lady, with one hand he grasps the strap hanging from the roof, and the other hand is seemingly thrust into his coat pocket. I say seemingly, for really the hand of the thief is thrust through his coat, the end of which is resting carelessly on the pocket of the lady. With the hand which is pushed through his coat, the thief quietly pulls up the edge of the overskirt worn by the lady, little by little, so he can reach the pocket…and then catching hold of the pocket-book, he draws it up and into his own pocket and then steps away.

His photograph ended up in a police rogues’ gallery, likely in Baltimore or Philadelphia. Whether it helped end his career as a pickpocket is a matter of conjecture.