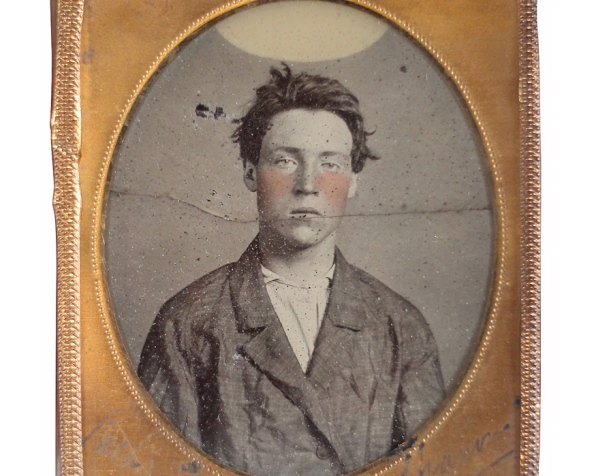 Note: This story is excerpted from my book, Captured and Exposed: The First Police Rogues’ Gallery in America.

On April 12, 1859, seven cases of kip (work) boots from Biggs, Staples & Co. were loaded onto the wagon of Andrew McCullough in Canton, Missouri, near the Mississippi River in the northeastern part of the state. McCullough was taking the load west to Edina, Missouri. Because the 38-mile trip would take him more than a day, he stopped overnight at the home of a friend named John Fisher. Before retiring for the night, McCullough went out to check his wagon and cover it with a sheet — at that time all was well.

The following morning, one of Fisher’s neighbors discovered a box of boots sitting by the road some distance from the wagon. Several pairs were missing from the box, including two sets, sizes eight and nine, in which one boot had been removed from each pair. Fisher headed to town to find the boots’ owner, James Biggs, and report the theft to him. On the way he noticed two men wearing new kip boots and immediately suspected them of having tampered with the box and removed the boots. A small posse was formed to hunt for the suspects, who were soon located not far from town.

Nineteen-year-old Richard Shannon was found wearing the incriminating mismatched boots. His companion, James Ford, an older, larger man, was also shod in new boots made by Biggs, Staples & Co. Shannon gave himself up, but Ford pulled out his revolver. One of the men in the posse fired shots in response. No one was injured, but Ford temporarily escaped. He was soon recaptured, and both he and Shannon were tried and convicted of grand larceny for the theft of the entire case of 12 pairs of boots, valued at $48 — despite the fact that no witness saw either man remove the case from McCullough’s wagon. (The lesser charge of petty larceny might have applied if the men had been accused of stealing only the boots they were wearing.) Both men were sentenced to two years at the Missouri State Penitentiary, however, Ford escaped from jail while awaiting transfer to Jefferson City and was never recaptured.

Reverse side of Shannon’s rogues’ gallery photo. Collection of the Missouri History Museum.

Shannon served his full sentence, beginning on September 22, 1859. The date on his St. Louis rogues’ gallery photo — August 9, 1858 — may be incorrect because it’s nine months prior to the date of the crime. In his photo, the auburn-haired Shannon wears the wrinkled, lightweight jacket of a laborer. With his tousled hair; young face; and rosy, hand-tinted cheeks, he looks like the last person one would expect to see headed to a prison where 12-hour days of hard labor, crowded cells, poor food, and inmate whippings were the norm.

Born in 1839 in the town of Galena in northern Illinois, Richard Emmet Shannon was the third of ten children belonging to Irish immigrants Thomas and Mary Shannon. Prior to his arrest, Richard Shannon worked as a raftsman, bringing logs that were tied together as rafts down the Mississippi River to the sawmills. Of the identified individuals in the Rogues’ Gallery Collection about whom information was found, Shannon is one of only two people who didn’t commit their alleged crimes in St. Louis.

In October 1861, two weeks after his release from the Missouri State Penitentiary, Shannon enlisted in the 2nd Kansas Cavalry, serving as a private in Company I during the Civil War until his muster-out on May 25, 1862. He enlisted in the 3rd Cavalry, Company H in Vallejo, California, in July 1870. At the time of his enlistment, Shannon worked as a stonecutter (perhaps this occupation was inspired by his father, who worked as a stonemason). He deserted his company on January 11, 1872, and managed to avoid being captured. By the late 1870s he resided in San Francisco, where he worked at cutting and shaping stone.

Shannon was familiar not only with stone masonry but also with horses, a fact that led him to try his hand at entrepreneurship. In May 1882 the federal government issued him a patent for a rein holder — a mechanism he invented for securing the reins of a carriage’s horse to keep them from getting tangled with the horse’s feet. This was the second such device Shannon submitted for a patent, stating in his application: “My present invention is an improvement upon my former one.” It’s unknown whether either of Shannon’s rein-holder designs was ever manufactured.

In July 1885, Shannon visited Chicago and spoke at a strike of the Chicago West Division Railway Company, where newspapers covering the event intriguingly described him as a “labor agitator from the Pacific coast.”

One thought on “Prison for Boots”