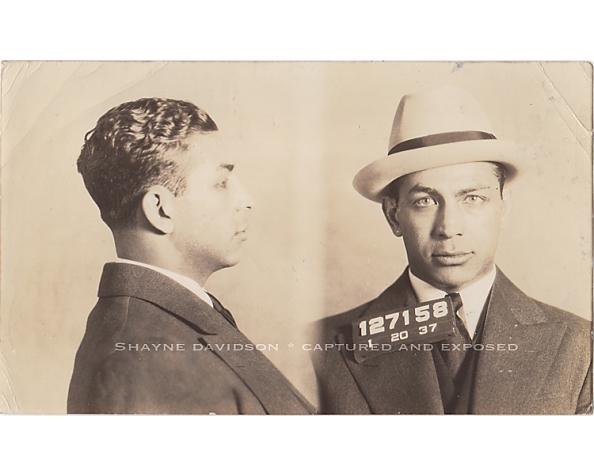 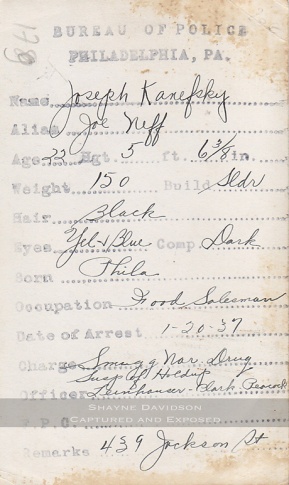 Pauline Wernovsky had been waiting a long time to marry her sweetheart. In fact she’d been waiting two and a half years for her fiancée, Joseph Kanefsky, to get out of Holmesburg Prison in Philadelphia and he’d finally been released after serving time for burglary. But on January 20, 1937, he and two prisoners and their girlfriends were charged with smuggling narcotics into the prison. Instead of marrying Pauline it looked like Kanefsky was headed back to the slammer.

Judge Parry, however, was sympathetic to Pauline plight. The persuasive young woman told him she would personally make sure her fiancée stayed straight, so he allowed Kanefsky to sign a $2000 bond, gave him two years probation and the couple were married before a magistrate then and there. As one newspaper put it, “Cupid pleaded successfully in Philadelphia Quarter Sessions Court for Joseph Kanefsky.”

The other four people arrested for dope smuggling were convicted of the charge.

Kanefsky, alias Joe Neff, has a self-assured look in his mugshot. His stylish hat is tipped at a rakish angle and his yellow-blue eyes have an intense gaze. He has just a hint of a smile playing on his lips. It’s as though he already knows that his pretty, dark-haired girlfriend is going to play the judge for a chump — his freedom to follow.

Two and a half years later, in September 1939, Pauline and Joe were in front of a different judge, charged with illegal possession and use of narcotics. They were arrested while sitting in an automobile parked on a Philadelphia street and detectives testified they found a hypodermic needle and morphine in the car. Having previously played Joe’s “get out of jail free” card, both were sentenced to the Philadelphia House of Correction.

In May 1944 Kanefsky was in trouble again when he was caught trying to use prescription blanks stolen from a South Philadelphia physician’s office to obtain narcotics. He was charged with forgery and drug addiction.

The detectives said they had spent some time watching him stroll along Broadway looking for customers. They said that when he was arrested a man who was walking along with him escaped.

Detectives found $329, a capsule of opium and 15 envelopes of heroin in Joseph Kanefsky’s pockets. He was charged him with possession and suspicion of selling illegal drugs.