I was very fortunate to purchase this news photo on eBay a few years ago. It shows newly minted SFPD policewoman, Blanche Payson, being sworn in by Police Chief D.A. White. I suspect the photographer was careful to make sure the photo on the wall of famed police detective, Isaiah Lees, was also visible in the picture. Lees, who died in 1902, has been credited as being the policeman who came up with the idea of the Rogues’ Gallery (mugshot photography). While that claim can be debated, there’s no doubt he was an early user of photography to help identify criminal suspects.

Here’s the full photograph. It was printed in reverse and a note on the back specifies that it needs to be flipped “so hands will be right.”

But back to Blanche: She was also a first. The photo was likely taken to announce the fact that San Francisco had hired its first “special” policewoman. Blanche would be charged with directing traffic and keeping things safe and orderly for women and children at the Toyland exhibit at the Panama-Pacific International Exposition of 1915. “Mashers” (men who sexually harassed women) were to be her special quarry. She also guarded the Liberty Bell while it was on display at the expo.

She was born Mary Elizabeth Bush in Santa Barbara in 1881 to Thomas and Sarah Bush. By the time she married Eugene Payson, a commercial traveler, in 1908, she had changed her first name to Blanche. In 1910 Payson placed an announcement in the local papers that he wouldn’t be responsible for his wife’s debts. The couple divorced but she kept his surname. In 1923 she married Allen Thurman Love, but that marriage also ended in divorce.

Blanche was hired in part because she had family connections to policing: her uncle, Dan Martin, served as the first police chief of Santa Barbara. She also came recommended for the job by William Pinkerton, the renowned private detective of the Pinkerton Agency (“We Never Sleep”).

Another useful attribute was that Blanche was an imposing physical presence. Depending on which press report you believe, she was somewhere between six foot four and six foot six inches tall. Not to mention that when she was hired, she weighed in at 235 pounds.

After the exposition ended Blanche moved to Hollywood and took up a new career: film actress. It’s possible the acting bug bit her when she was essentially “on stage” while working at the expo.

She made her first film, “Wife and Auto Trouble,” at Mack Sennett’s Keystone Studios in 1916. She successfully transitioned to “talkies” and made many more films, mostly slapstick comedies, over the next three decades. With her towering height, she often played the “heavy” for comedians, including The Three Stooges and Laurel and Hardy. She continued to appear in films until 1943. 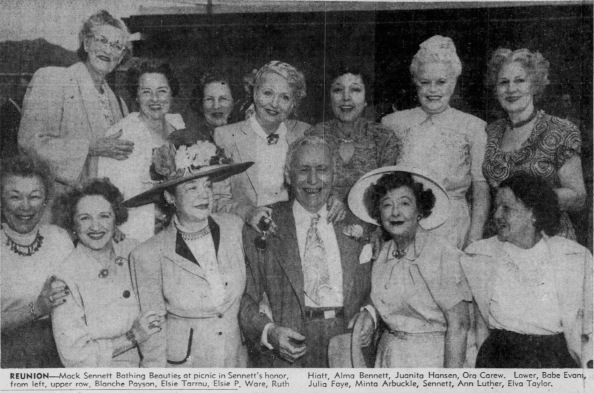 Blanche (upper left) at a reunion of the Mack Sennett “Bathing Beauties” in 1950.

In 1925 a reporter interviewed Blanche about her police career. She informed him that, in her opinion, women made excellent police officers and were particularly well suited to being traffic cops. “Women do not lose their heads so easily as men. They do not burst into profanity on such slight provocation. They are not so dictatorial as men,” said Blanche.