She gazes off in the distance with a look of calm confidence on her face. With her hair pulled tightly back from her forehead, a small curl nestling near her ear and delicate lace gloves on her hands, she appears to be the epitome of a beautiful and alluring antebellum woman.

It was in the late summer of 1859, when she sat weeping at the Philadelphia train depot. Her distress attracted the attention of a gentleman. He went over and asked if he could be of assistance. She told him her name was Carrie Bradford and she was the daughter of Captain Bradford of Washington. Her distress, she claimed, was due to the fact that she had no place to spend the night.

Her youth and attractive features did not go unnoticed by the gentleman. He was sympathetic to her situation — a woman of her class could not be left on her own in a big city like Philadelphia. Unscrupulous people might take advantage of her.

He took her to a nearby hotel and explained the situation to the proprietor, convincing him to let her stay. The next day she wrote a letter to her father in Washington and asked the proprietor to mail the letter for her. Then she went to see a dressmaker, Mary Ann Kent, at her shop on Lombard Street, a few blocks from the Delaware River.

At the shop she told Miss Kent that her brother had recently died in Montevideo, Uruguay. She explained that his funeral would be held in Philadelphia and she needed a beautiful black mourning dress. Miss Kent was also young — about the same age as her client. Although she did not know where Uruguay was, she was convinced by the story of the refined young woman. She took her measurements and began to work on the dress.

When the dress was ready the young woman returned to the shop and tried it on. It was stunning. She was very pleased with it — so pleased, in fact, that she decided to wear it out of the shop. She told Miss Kent to donate her old dress to “some poor person.”

This was odd, but Miss Kent didn’t question the decision of such a gracious woman. She also hoped the young lady would come back to the shop and order more expensive dresses.

The new dress cost the astonishing sum of $21.71 (about $625 nowadays). Of course she did not carry this amount of money in her purse. She asked for the bill to be sent to an address in West Philadelphia, where, she said, her father was staying temporarily.

Miss Kent let her walk out of the shop wearing the dress. She lived to regret it.

The young woman went next to the shop of an undertaker and told him the story of her dead brother in South America. She asked him to make a coffin for her brother’s funeral. The undertaker heard lots of sad stories in his line of work. He took the order, but checked the address she gave him before he started the work on the coffin. He discovered that no one knew “Miss Bradford” there. Naturally he did not make the coffin. Instead he reported her to the police.

“Carrie Bradford” was an alias, one of several that she used while staying without paying at various hotels around the City of Brotherly Love. As it turned out, Miss Kent was not the only business owner she had swindled.

The Philadelphia press covered the story of the sly woman con artist. The story was also carried in the papers in Baltimore and Brooklyn to serve as a warning to those in other cities.

In early September 1859 she appeared in court before Alderman Ogle, charged with obtaining goods under false pretenses. 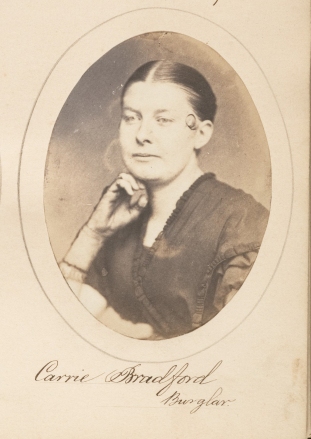 Her real name was Mary Ann Devine, but it’s hard to say more precisely who she was. It’s likely she was a poor immigrant from Ireland who came to the Philadelphia when she was about ten years old, fleeing the terrible famines in her native land. She probably worked as a servant from dawn to dusk, six days and half days a week, for which she was paid a pittance. One day she realized that by making use of her good looks, imagination and acting abilities, she was a few easy lies away from eating meals in a nice hotel, sleeping in a soft bed and wearing a beautiful gown — unthinkable luxuries for someone like her!

Whether she ended her crime spree in 1859 is impossible to say.

Her photo is a police mugshot, one of the earliest taken in America. To explore more of the faces of people arrested between 1857 and 1861, check out “Rogues, a Study of Characters.” The collection is online at the Metropolitan Museum of Art.

6 thoughts on “The Divine Miss Devine”