Counterfeiting is a serious crime in America, but it’s nowhere near the problem it was in the nineteenth century. According to the National Archives, in the years after the Civil War, between one-third and one-half of all currency that changed hands in the United States was counterfeit. That’s an astonishing statistic! Imagine how you’d feel if there were a 50% chance you’d be given fake money in your change when you went shopping.

The United States Secret Service was born out of the need for a federal law enforcement agency to combat this rampant counterfeiting. Andrew L. Drummond was an early Secret Service detective who later became an author. One of the stories in his 1909 book, “True Detective Stories,” was about his arrest of a counterfeiter named Cooper Wiltsey:

A big powerful man, he had about as wicked eyes as I ever saw in any human being. Men generally hated him. Such women as he met invariably liked him. He was about fifty years old, but the sprinkling of gray in his hair did not handicap him. Always there was some woman to be found who would swear that Cooper Wiltsey was all right.

Drummond sounds a little envious of Wiltsey’s success with the ladies, doesn’t he?

At any rate, in 1878 Drummond got word that Wiltsey was running a counterfeiting operation out of a house in Philadelphia. He worked with the local police to investigate and they located the house where they believed Wiltsey was making counterfeit coins in a room on the second floor. He gave a dramatic description in his book of the scene that unfolded the night the couple was arrested:

As I burst into the room my eye quickly caught two figures—that of a woman standing as if she were cast in bronze and that of Wiltsey leaping at me with a fifteen inch stiletto-like carving knife clasped in his hand. I leveled my revolver at his head and told him to stop or I would kill him. He stopped. As I called, Wiltsey’s eyes shifted from me to the head of the stairs. 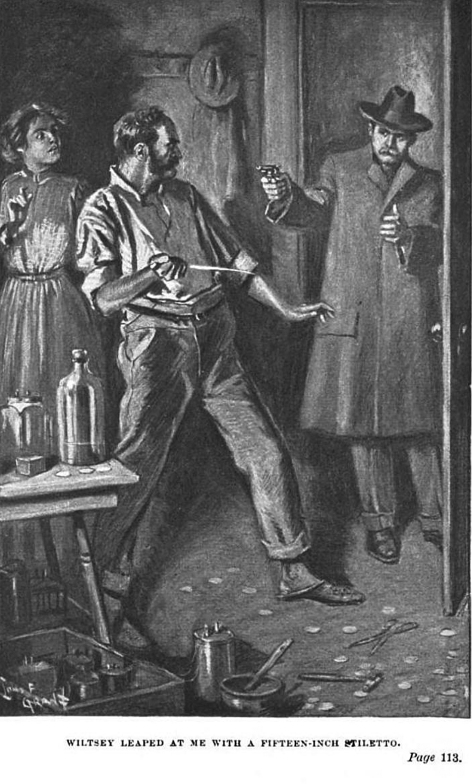 Thinking he had the situation under control, Drummond foolishly put his gun in his pocket and grabbed Wiltsey’s wrist. But Wiltsey refused to give up the knife and tried to cut Drummond’s fingers with it. Fortunately for the detective, his police back up appeared at that moment with their guns drawn. Wiltsey dropped the knife.

Wiltsey and his partner, Sarah Page, were in the process of melting a mixture of tin and antimony and pouring it into molds when they were arrrested. After the metal cooled and was removed from the molds, they planned to use an electric battery to add a thin layer of silver-plating to the fake coins. One silver dollar had enough silver in it to plate five hundred of the coins. Each “dollar” would be sold for between 25 and 35 cents.

Wiltsey was convicted of counterfeiting. Page was acquitted.

The Times of Philadelphia claimed that Sarah Page was Wiltsey’s mistress. But based on genealogical records, it seems more likely that she was his wife.

Cooper Wiltsey was born in New Jersey in 1833. In 1853 he and his wife Sarah had their first child, Benjamin. By 1864 they’d added another five children to their family. Wiltsey served in the 24th New Jersey Infantry during Civil War, achieving the rank of 2nd lieutenant.

The big surprise is that Wiltsey, the future counterfeiter, was employed as a constable in Gloucester City in 1870.

In 1882 Sarah listed herself as “widow of Cooper” in the Camden City Directory, but this was a little face-saving fib. Her husband was still alive and serving his sentence at the New Jersey State Prison in Trenton. By 1885 Wiltsey was back at home with Sarah and the kids, according to the New Jersey State Census. By 1891 he had his own restaurant in Gloucester City.

Sarah Wiltsey died in 1902. Cooper passed away “after a lingering illness” in May 1904. Both are buried in Gloucester City’s Cedar Grove Cemetery.

The perplexing question is why the Wiltseys, who appeared to be upstanding citizens, decided to become counterfeiters. Possibly enforcing the law somehow enticed Wiltsey into breaking it. As to his great success with the ladies, it seems that Drummond took some artistic license with his story, because Wiltsey seems to have been more of a family man than a Casanova.

11 thoughts on “The Counterfeiting Couple”

© Shayne Davidson and CapturedandExposed.com, 2017-2021. Unauthorized use and/or duplication of this material without express and written permission from this site’s author and/or owner is strictly prohibited. Excerpts and links may be used, provided that full and clear credit is given to Shayne Davidson and CapturedandExposed.com with appropriate and specific direction to the original content.