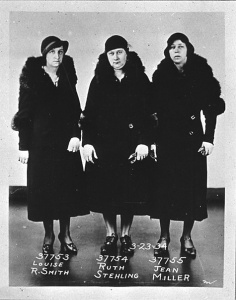 Warrants charging larceny were issued yesterday by the Circuit Attorney’s office against three women arrested last week in their room in Hotel Statler for shop-lifting. Police reported finding the wallet of a victim in the room. The women, all of whom said they are from Milwaukee, Wis., are: Ruth Stehling, 34 years old; Louise R. Smith, 32, and Jean Miller, 34. In the room police found a wallet containing $14, some checks and personal papers belonging to Mrs. Katherine Rueckert, 3435 Halliday avenue. Mrs. Rueckert had reported that the wallet was snatched from her in a downtown department store.

The Kusch family crime poster has the look of a kid’s school project, with the awkward placement of text, some of which was hand-drawn, and the amateurish attempt at a symmetrical layout. It was made by a St. Louis police officer in 1934 and photographed as a magic lantern slide, possibly for use as a lecture aid.

I suspect the point of the poster was to demonstrate how suspects might avoid being identified as repeat offenders by using aliases. The real names of the three ladies in stand-up mugshot were (left to right) Helen, Anna and Julia Kusch.

Another aim of the poster was to demonstrate that crime was a career choice that occasionally ran in families.

The mother of two of the three women in the photo was Mary Meka Kusch. Mary was a German immigrant to the United States who tutored her young daughters in how to steal ladies’ purses and forced them to become pickpockets. Mary’s husband, Michael, who was also born in Germany, was not involved in the “family business.”

In 1909 Anna Kusch was the youngest child ever arrested by the detective bureau in Buffalo, New York, after she was caught stealing shoppers’ purses in department stores. At the ripe old age of eight Anna was a suspect in many purse thefts. 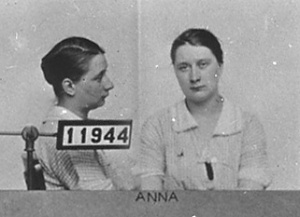 Anna and her older sister, Helen, were serial pickpockets while they were still in grade school. The girls strolled the streets, stealing ladies’ purses as the opportunity arose, and hiding their loot in a baby carriage. Imagine the surprise of the beat officer who leaned over to give the “baby” a tickle on the chin!

In 1910 the Kusch sisters were taken into police custody for pickpocketing. Mama Kusch got three months probation for teaching her children to be thieves.

The following year Helen was arrested again for stealing cash from the purses of women shopping on the main drag of Buffalo. She told the police that her mother sent her out every day after school to steal money and if she didn’t do it she got a whipping. Mary was charged with receiving stolen property. Helen was sent to a detention home for juveniles.

Meanwhile the sisters’ older brothers, John and Albert Kusch, were engaged in robbing the poor box at a local Catholic church. They drank enough whiskey to put Albert and a friend in the hospital in critical condition with alcohol poisoning. Albert subsequently recovered. John went on to be convicted of burglary and sent to New York’s Elmira Reformatory at the age of 19.

As Helen and Anna blossomed into their teen years they continued to shoplift and pickpocket. Both were caught and earned themselves another stay in a Buffalo detention home.

The Kusch family moved to Milwaukee, Wisconsin, by 1920. The change of state may have been motivated by their notoriety in Buffalo because their crime careers continued in “America’s Dairyland.” When Helen was 28, in 1926, she was arrested for pickpocketing in Milwaukee. She jumped bail and forfeited her $1000 bond.

John was arrested for passing bad checks in 1931 when he was 38 years old. Over the previous 20 years he’d accumulated 16 arrests, including one for contributing to the delinquency of a minor after he’d picked up an underage girl and had sex with her. He was sentenced to five to seven years in a Wisconsin state prison on the bad check charge. John joined Albert, who was already in state prison, serving a three-year sentence for the attempted robbery of a pharmacy.

When the Kusch ladies were arrested for pickpocketing in St. Louis, Helen and Anna had 25 years of experience under their belts. They knew it would be a smart move to give the police false names to fool them into believing it was their first offense. Julia Kusch was not their sister but she may have been their sister-in-law because Albert was married for a while to a woman named Julia.

Helen was picked up in Green Bay, Wisconsin, for shoplifting an item worth $1.50 in 1935. Police there claimed she’d been arrested many times in the past. She was given a six month suspended sentence and a $100 fine. Anna was also arrested and later released without charge.

The 1935 arrests of Helen and Anna were last time any Kusch family members appeared in the police news. It’s impossible to know if the poster put an end to their criminal activities, however there’s an old saying, “Fool me once, shame on you; fool me twice, shame on me.” That little proverb may have run through the mind of the police officer when he got out his glue and pen to make the Kusch Family crime poster.

5 thoughts on ““With Long Criminal Records””