John Medlock is to hang tomorrow for the murder of Carrie Boyd, or McKinney, more than three years ago in the Gardiner coal camp. The Boyd woman was living with a negro named McKinney when Medlock won her somewhat fickle affections. She went to live with him but after a short time left him for another man.

The murder occurred on the night of January 4, 1901. John Neeley (aka Medlock) went out looking for Carrie Boyd and he finally found her in the Gardiner saloon. Fueled with a jealous rage, he pulled out his pistol and shot her without warning. As she started to fall to the ground someone caught her and tried to hold her up. “Let her alone,” he yelled. “I want to see her drop.”

Witnessing the shooting sobered up the bystanders and most of them cleared out of the bar in fear for their own lives. Carrie died on the floor of the saloon. Her killer disappeared into the darkness. No one was foolish enough to try to stop him.

Gardiner was a mining town in Colfax County, New Mexico. James Gardiner, a geologist for the Sante Fe Railroad, discovered coal in nearby Dillon Canyon around 1881. Soon the Old Gardiner Mine swung into production. In 1896 the Raton Coal and Coke Company took over the mine and three railroad companies established coke ovens in town. Coal miners, both white and African-American, were drawn to the area for work.

With little to do in the evenings but drink, the saloon was a gathering place for the citizens of Gardiner. Hard drinking led to fighting. A few years after Carrie’s murder the partition that separated black and white drinkers in the saloon was smashed to bits during an altercation.

Coal mining was and still is a dangerous profession. John lost the sight in his right eye during a mine explosion. He also carried the scars on his forehead and right cheek from severe burns he got in the same accident. In addition he suffered from syphilis. Given how few women lived in New Mexico back then, venereal diseases were practically an occupational hazard for miners and cowboys.

After he murdered Carrie, John headed east to Indian Territory. He wouldn’t be caught for more than two years and when he was captured it was not for Carrie’s murder but for an assault on a woman who survived the attack. Under an alias — John Medlock — he was sentenced to three years at Leavenworth Penitentiary for the assault.

Before John was released from Leavenworth the New Mexico authorities realized he was the man who shot and killed Carrie Boyd. The sheriff of Colfax County, Marion Littrell, picked him up from the federal penitentiary on May 14, 1905, and took him to New Mexico to face the murder charge.

He was convicted of Carrie’s murder and sentenced to death by hanging. He didn’t fight the sentence.

The plan was for John and another man, David Arguello, who was convicted of the murder of a peace officer, to be hanged together on May 25, 1906. Two for the price of one saved the county some money. The sheriff was besieged with applications from people who wanted to witness the hangings. By law only 20 were allowed to attend.

The night before his execution John gave a statement confirming his guilt in Carrie’s murder. He said he regretted the crime and the bad company he kept when it happened. Then he went to bed and slept well. The next morning, after eating a good breakfast, he whistled and sang in his cell as he washed up. 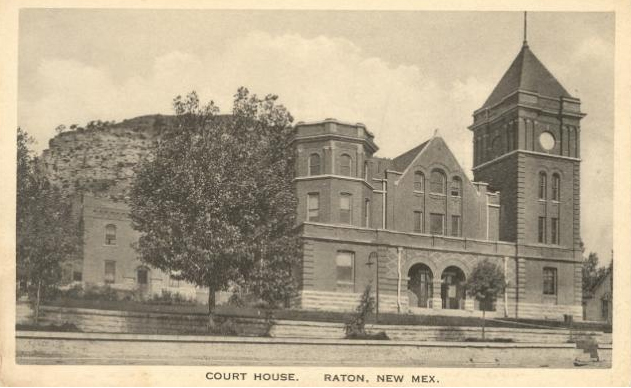 After exchanging a few last words with his minister, John calmly mounted the scaffold that had been set up on the west side of the Raton County Courthouse. The trap was sprung at 10:15 a.m. but his neck wasn’t broken in the drop. He died of strangulation 13 minutes after his body went through the trap door.

The executions of John Neeley and David Arguello were the only legal hangings in Raton, New Mexico. Of course many lynchings also occurred in New Mexico in the late 19th and early 20th centuries.

During the Great Depression the mines in Gardiner closed and after World War II the few families still there left. By 1954 Gardiner was a ghost town. Now the land is gated private property owned by media mogul Ted Turner. It’s part of Turner’s Vermejo Park Ranch and if you have a spare $450 you can book a night’s stay there.

7 thoughts on “The Drop”