Six inmates, all from the prison hospital, escaped from the Hutchinson reformatory here last night at 8:15 o’clock in one of the most daring and systematic breaks in recent years. Following the carefully laid plans the six took advantage of two prison ladders, one of which was equipped with special hooks, made a dash for a dark spot on the east wall, scaled it and disappeared before the hospital guard noticed their absence.

Clarence Pruitt was paroled in August 1928 from the Kansas State Penitentiary (KSP) after serving two and a half years for stealing 32 chickens from a farmer named Guy Platte. Soon after he was paroled, authorities discovered that in 1925, he’d escaped from the State Industrial Reformatory in Hutchinson. Rather than allowing him to enjoy his new freedom, they sent him back to the reformatory to serve out the rest of his 1924 sentence for grand larceny. 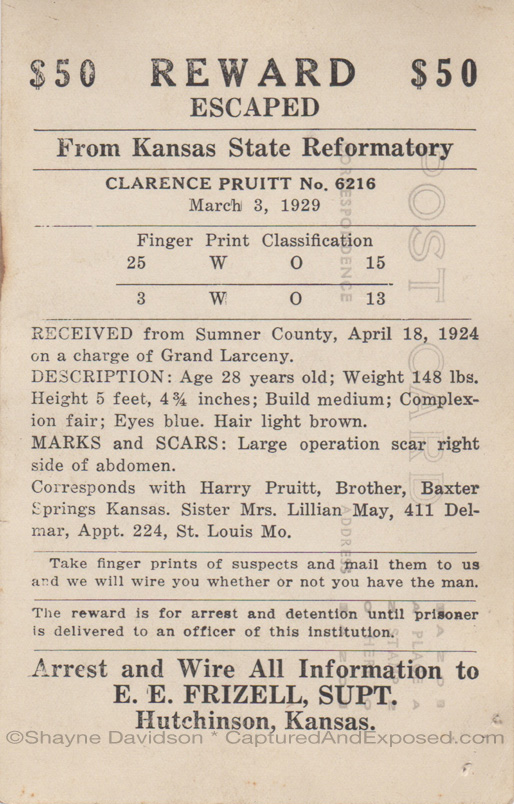 Clarence was one of the six men who escaped from Hutchinson into the frigid March night in 1929. He was recaptured in July. Rather than risk another escape from Hutchinson he was sent to the more secure state penitentiary — round two at the KSP for Clarence.

Lyal Berry became prisoner # 6549 at the KSP on July 19, 1919, after he pleaded guilty to second-degree burglary. He’d burgled three homes in Peabody, Kansas, was arrested and broke out of jail by cutting through the bars on the window of his cell with a stolen saw. He told prison officials he was 22 but he was actually only 17 years old and a recent graduate of the state reformatory for juveniles in Colorado. Though young, he had an impressive criminal career of robberies and jailbreaks under his belt, along with a bullet wound sustained when he was shot by a pursuing police officer after his jailbreak.

Lyal’s real name was Cecil Pruitt. He loved aliases and he had at least five of them, including the name of his older brother, Clarence. Born on August 17, 1901, he was two years younger than Clarence. The Pruitt brothers’ father, William, died in 1911, while they were still boys. Their mother, Elizabeth, moved to Denver, Colorado, after William’s death, where she got remarried. Clarence left school after 8th grade to work as a coal miner and farmer. Cecil only made it through 5th grade.

Although he had a poor prison record, Cecil was paroled from the KSP in August 1924, four days after his 23rd birthday. It didn’t take long for him to violate his parole. The Kansas authorities located him at the New Mexico State Penitentiary, in July 1925, where he was serving a five to six year sentence for burglary and armed robbery. He was returned to KSP to serve the rest of his sentence for the 1919 burglary on July 20, 1928 — round two at the KSP for Cecil.

The Pruitt brothers had a couple of months together at the KSP before Cecil was pardoned and released on December 13, 1929. Clarence got out in 1930.

Unfortunately the story doesn’t end well for the Pruitt brothers. In March 1931, a car containing more than 100 stolen chickens was found abandoned in Greeley, Colorado. The vehicle was traced to Clarence, who pleaded guilty to theft of 1,200 to 1,800 chickens in the area and was sentenced to two to three years in a state prison. Clarence’s wife blamed his brother for her husband’s legal troubles, but by then Cecil was in a Denver jail on a narcotics charge. Plus Cecil had always been more interested in stealing cash and jewelry than chickens.

Despite having served multiple prison sentences for chicken theft, other people’s chickens continued to tempt Clarence, and by 1940 he was incarcerated in the Missouri State Penitentiary. On May 8, 1950 he was arrested for stealing 100 chickens from farms in several counties outside Denver. He pleaded innocent to the charges and the outcome of his case wasn’t reported.

If he’d spent his criminal career stealing chickens, Cecil might have lived to a ripe old age. Instead his body was found in a “blood-stained, bullet-pocked” car in Kansas City on September 7, 1931, less than a month after he turned 30. He’d been beaten to death. Police suspected a fellow gangster killed him, but his murder was never solved. His sisters collected his body and buried him.

One thought on “Brothers in Arms and Chickens”