A number of fur dealers who were robbed during the winter appeared at Central Station today in an effort to identify Mrs. Ethel Goodwin, divorced wife of Abe Attell, the former boxer, and five men who are under arrest on suspicion of having been concerned in thefts of furs worth $3,000,000.

Police Lieutenant Carlin pounded on the door of a room at Philadelphia’s swanky Majestic Hotel. Ethel Attell, the room’s occupant, refused to open it. She claimed she was only wearing a negligee and that she needed to speak to her lawyer first. The lieutenant prevailed and the door swung open. Inside he found Ethel with a man named Frank Lewis. Both were suspected of being involved in a recent spate of fur robberies from wholesale fur dealers in the city. Frank put up a fight and was knocked out by the lieutenant. 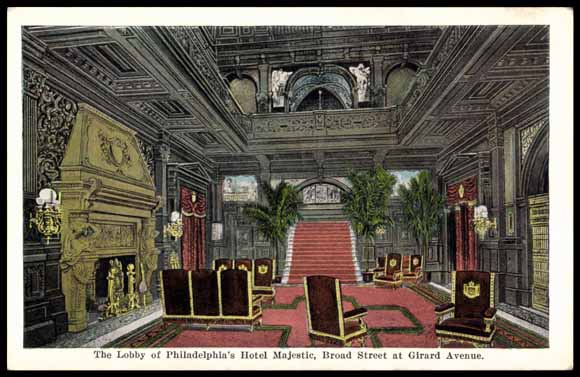 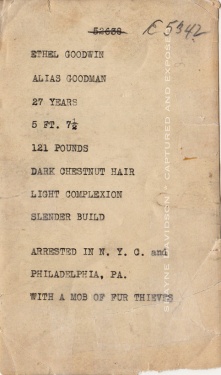 In order to protect her identity she gave the police an alias, Ethel Goodwin. She was immediately unmasked and her real name, Ethel Attell, was published in news reports of her arrest. Reporters realized she was the ex-wife of “The Little Hebrew” Abe Attell, the retired prizefighter who’d recently been accused of fixing the 1919 World Series. Sporting a pearl necklace, fur coat and a hat covered in fake grapes, Ethel’s mugshots were snapped by the police.

She was suspected of providing stolen burglar alarm wiring diagrams for several wholesale fur companies to a gang of thieves. The police foiled the gang’s recent plans to rob an Arch Street fur warehouse. After their arrests they gave up Ethel’s name and address.

This was the second time in three months that Ethel had been in legal hot water. In December 1921 she and two male accomplices — small-time thugs with multiple aliases — were arrested on suspicion of stealing 1.5 million dollars worth of cancelled Liberty Bonds, chemically altering them to remove the cancellation marks and trying to resell them. Ethel was caught trying to pass one of the bonds at a Seventh Avenue deli in New York City. She claimed she’d paid $300 for the $500 bond, having bought it innocently from an actor friend who’d fallen on hard times. She also told police she was 27 years old when she was actually 37. A full opium kit was found in Ethel’s upper west side apartment after her arrest.

Elizabeth Egan and Abe Attell were childhood sweethearts. They were married in 1907, at the height of his boxing career, in Santa Ana, California. At some point shortly after her marriage, Elizabeth decided she preferred the rhyming cadence of “Ethel Attell,” so she changed her first name. 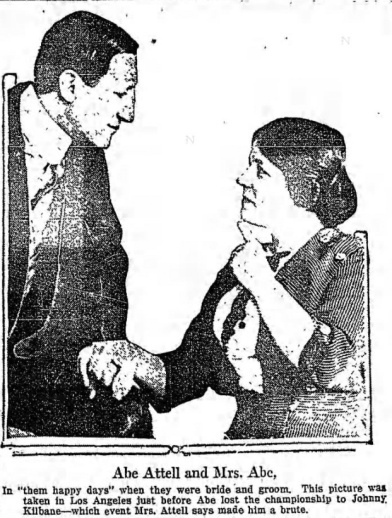 Abe lost his featherweight title in 1912 and the marriage spiraled into quarrels over Ethel’s spending on clothes and jewelry and Abe’s losses at gambling. Fortunately the couple had no children, but the quarter million dollars Abe had made in the ring had all been squandered. A few days before Christmas in 1914, Ethel was forced to flee from her husband’s wrath. She left their Chicago hotel room half naked and all her jewelry remained behind. With the marriage in tatters, Ethel filed for divorce, charging cruelty. She demanded $200 monthly alimony from Abe’s earnings in vaudeville, a career path he’d switched to after his days as a pugilist ended. She also wanted her jewelry back. The divorce was finalized in 1915.

By 1922 Abe had emerged from a cloud of suspicion after charges against him related to the series fix — the Black Sox Scandal — were dropped due to insufficient evidence, though he almost certainly was involved. By the time Ethel was in legal trouble Abe was the co-owner of a shoe store, The Ming Toy Bootery, which specialized in novelty footwear for celebrities, located in Manhattan’s theater district.

Ethel either got lucky or she hired one of her ex-husband’s mobster lawyers. At any rate she wasn’t charged with wrongdoing in the Liberty Bond or the fur theft cases. She wisely kept a low profile after that. She died in 1966. True to form, her tombstone lopped eight years off her age.