SPRINGFIELD, Ill., July 13–Paroled from the Pontiac reformatory, Arthur Groves, alias Harry Williams, a negro, has repaid former Governor Yates, his benefactor, by stealing $3,000 worth of diamonds from the former executive’s handsome new residence in Washington Park. The robbery occurred on June 7 last, at a time when the former Governor was in Kentucky attending the Powers trial as an associate attorney. News of it has only just leaked out through local police officers.

After discovering that her jewelry was missing, Helen Yates, wife of former Illinois governor, Richard Yates, searched the coat of her servant, Harry Williams, and found her brooch pinned in the lining. This “confirmed her suspicions that someone about the place has committed the robbery.” Rather than calling the local police, she telephoned Superintendent Mallory, a family friend who ran the Pontiac State Reformatory where Harry had been incarcerated before he was paroled and hired to work as a coachman for the Yates family. She told Mallory she suspected Harry of stealing the family gems, consisting of “solitaires, brooches and clusters of diamonds.”

Harry disappeared from the Yates’s newly built, architect-designed mansion before Mallory arrived to investigate. Mrs. Yates stated later that when she called the superintendent from the first floor phone in her home, she suspected Harry had been on the second floor, eavesdropping on the phone extension, therefore he realized she suspected him of the theft. Or maybe she called from her bedroom and Harry listened in on the first floor phone. Reports varied about who was on which phone.

Though he was last seen working in the carriage house behind the main house, the fact that Harry went missing after the phone call confirmed his guilt as far as the newspapers were concerned. Mallory offered a reward of $100 for Harry’s capture and the Yates family upped the ante with $150 of their own cash.

A local police detective was sent to try to locate and arrest Harry. He tracked him to several cities in northern Illinois but lost him en route to Chicago. 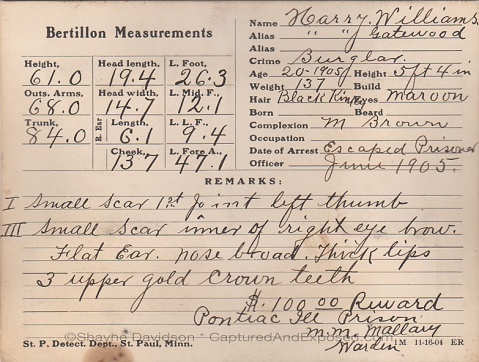 It was reported that Mallory found Harry in Louisville two months later and “it was necessary to shoot him to capture him.” Harry survived the shooting and was sent back to the state reformatory on a stretcher. There were no reports on whether or not he recovered from his injuries.

Mallory found a couple of the stolen rings in the possession of a Chicago woman named Carrie Washington, however the rest of the loot, according to Carrie, had been pawned. Mallory recovered most of the jewelry from a State Street pawn shop and returned it to Mrs. Yates.

The Yates family lived in their Springfield mansion until 1928. A ghost, it is said, now inhabits the house, pacing the attic on nights when the moon is full, possibly in search of lost family gems.

Photo of Mrs. Yates from the collection of the Abraham Lincoln Presidential Library & Museum.