Arraigned in police court yesterday before magistrate P.J. McNamara, George Kelly, 27, of Wilkes-Barre, was held in $500 bail on a charge of larceny, while a woman, who describes herself as Dorothy, his wife, 22, was held under a similar bond as accessory.

The woman has had a rather picturesque career, according to her story to Superintendent of Police M.J. McHugh. She says she ran away from home, lured by the glamor of the stage, when only fifteen years of age. She started out as a chorus girl, drifted into the carnival field in the role of fortune teller, then cowgirl with a wild west show, later into vaudeville, and most recently into burlesque. Her mother, she says, is the owner of a store in Wilkes-Barre.

The couple were (sic) arrested here for the theft of a dress from the Jordan & Plottle store on Wyoming avenue.

Did Dorothy want a new dress for her burlesque routine or did she need something valuable to pawn or resell? One minute she and her friend George were discussing what to buy at an upscale Scranton ladies clothing shop and the next minute they were gone, taking an expensive dress with them but omitting to pay for it. The shop clerk immediately noticed the dress was missing and called the police.

Police quickly arrested Dorothy and George. Their refusal to tell detectives where they lived made the authorities think they had more stolen loot at their house. Add to that the fact that George had a police record — he’d been arrested a few months earlier on suspicion of burglary. The police decided he was not involved in the burglaries, but he was told to get out of Scranton — an order he’d ignored.

In her mugshots Dorothy looks more amused than worried about the situation she found herself in. Maybe she’d been arrested before and figured it was no big deal. 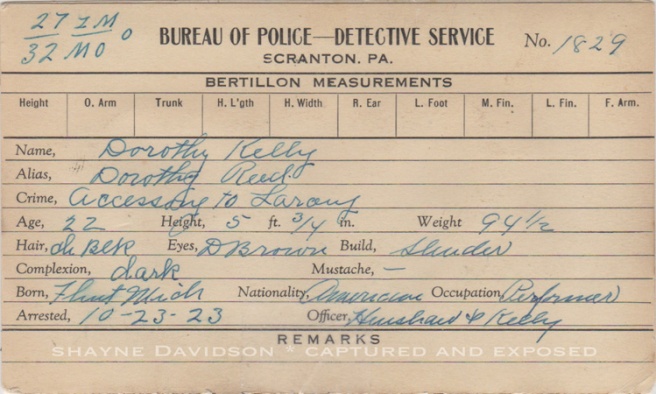 Whether or not the couple was actually husband and wife or just shoplifting cronies couldn’t be determined. Young Dorothy had a checkered career after running away from home at a tender age. She started out as a chorus girl and things went downhill from there, to the point that she was doing semi-nude “burlesque” dancing for a living by the time she and George were arrested.

George pleaded guilty to larceny and receiving the following month. The case against Dorothy was dropped but there’s no doubt that the judge ordered her to get out of town. If she had any sense she complied.