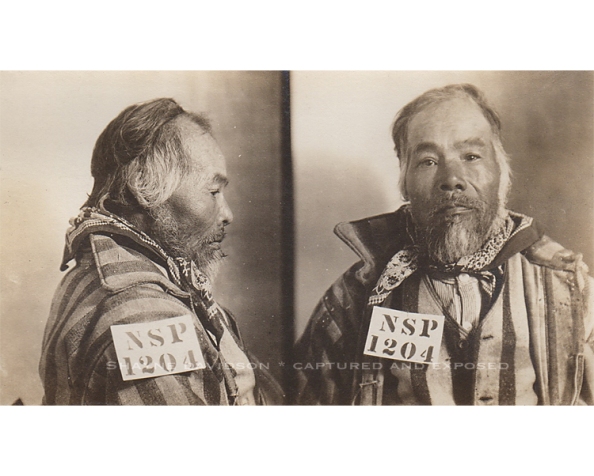 Wong Fong knew he would never see his Chinese homeland again — he was going to die in prison. When his mugshot photos were taken, in 1908, he’d been incarcerated in the Nevada State Prison for more than 13 years for murder. In his front view photo he looks stoic but in the side view he looks downcast, sad and ashamed.

The murder occurred on October 4, 1894, in White Pine County in eastern Nevada. Wong (called “George Fong” in his court case) was charged with shooting another Chinese man, Hing Lee, with a pistol and killing him “without authority of law and with malice aforethought” according to the judgment of the Nevada Supreme Court.

Wong pleaded not guilty but the jury found him guilty. Since it was decided that the crime was carried out with malice aforethought and that Wong was sane at the time of the shooting, he was convicted of 1st degree murder in December 1894. He was sentenced to death.

His attorneys appealed the conviction and a new trial was ordered for Wong on procedural grounds. But on May 28, 1895, he withdrew his plea of not guilty and entered a guilty plea. He said he was changing his plea because he was in constant fear of his countrymen, fellow prisoners who were held with him in the jail in Ely, Nevada. He claimed they were not friendly towards him, wanted to do him bodily harm and he thought it would be safer in the state prison.

Newspapers described the victim as a “highbinder tong man,” an enforcer or assassin, literally a “hatchet man,” for a “Tong”— Chinese secret societies associated with underworld activity, similar to the Italian Mafia in the twentieth century. A highbinder, it was said, preferred a sword, knife, dagger or club to a gun.

Wars between various Tongs broke out frequently on the West Coast in the late nineteenth century, primarily in San Francisco. However it seems unlikely that members of two warring Tongs would have lived in sparsely populated White Pine County. It’s possible that the murdered man was a Tong member who, while passing through White Pine, got into a disagreement that led to the shooting. However it was not reported that Wong was part of a Tong, so why would an elderly man who worked as a cook pick a fight with a gangster?

With his guilty plea at the second trial, Wong received a new sentence — life imprisonment, rather than death. He was transferred to the Nevada State Prison in Carson City. He was reported to be 75 years old at the start of his incarceration in 1895, however his prison card lists his age as 75 in 1908.

He achieved a peculiar sort of fame in the state and it was reported in the Nevada newspapers when Wong became sick and was on the verge of death. It may be that people suspected he wasn’t guilty or there was sympathy for an old man who had spent the last 20 years of his life a prisoner.

Wong lived until October 26, 1915, when he died, reportedly at the age of 96. He was buried in the cemetery on the prison grounds. 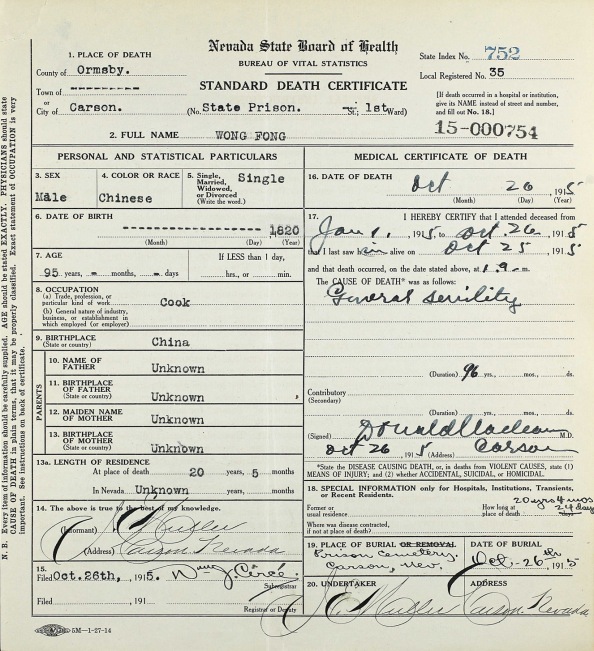