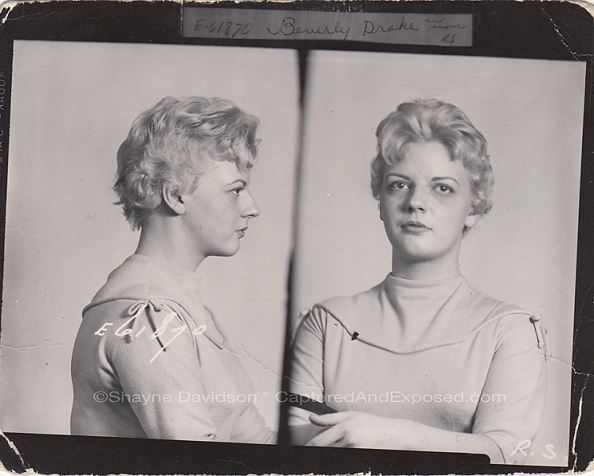 Five members of a ring alleged to have passed at least $200,000 in stolen forged checks in the last two years were in custody Friday while a sixth person was sought.

A gang of forgers from the south side of Chicago worked a lucrative check fraud for a couple of years, beginning in 1958. First they stole blank checks from small businesses, mostly gas stations. Next they stole customer information file cards from chain stores, such as Sears and Woolworth’s, made copies of the cards and returned them the same day. Then the blank checks were filled in with the customer information from the stolen cards and cashed at the chain stores and currency exchanges in the suburbs west of the city.

It worked because store managers didn’t necessarily require I.D. to cash checks for regular customers and there were no computers to verify credentials. But it took nerve and some acting skills.

The gang consisted of a Patrick “Black Pat” Iannino, a chaffeur, and his girlfriend, Salline Carroll, a dancer, along with Frank Simmons, John Sellinger, Robert McAffee and Beverly Drake. All were described in the newspapers as narcotics addicts. In addition to feeding their drug habits they used the money they stole “living it up, wearing silk suits, driving large cars, etc.” according to one news account.

Their lavish lifestyle aroused the suspicions of Paul Newey. Paul, the son of Assyrian immigrants to the United States, was born in 1914 in Minneapolis. He earned a law degree and then applied to work for the FBI, but they wouldn’t hire him due to his “ethnic appearance.” Instead Paul went to work for the Cook County State’s Attorney in 1957. “He was the most persistent investigator I’ve ever known,” said former Chicago Daily News criminal courts reporter Ed Baumann. “He was like a bulldog; he didn’t give up. He pursued things even when he didn’t have to.”

As the summer of 1960 waned, Paul and his team kept the gang under surveillance. “It’s unusual for narcotics addicts to have that kind of money,” he said, “so we started watching them on the assumption they were peddling dope. It was only last week when we made the arrests that we discovered the true source of their income.”

Beverly Drake was the one that got away, or at least she was the one Paul couldn’t locate in August 1960. I can’t say for certain that her mugshot is from her arrest for the check forgery scam, because if she was eventually caught it wasn’t reported in the newspapers. There’s no information on the back of the photo other than her name and F/W/. However the photo is from that time frame and it came from a group of mugshots taken in Chicago.

With her short platinum blond hair and pretty features Beverly looks to me like the doppelgänger of actress Shelley Winters. Whereas Shelley usually played an edgy dame whose mouth got her into trouble, Beverly looks clean cut, trustworthy and only mildly annoyed to have her mugshot taken. It seems plausible that honest-looking Beverly was the gang member who did most of check cashing. Was she a “dope addict?” Only the slight circles under her eyes hint at a darker side to her life.

I don’t know if Paul Newey, who died in 2001, ever found Beverly. I found her with the help of John Van Noate. John is a vintage photography collector and dealer and he picked up Beverly’s mugshot for me at a photo show I couldn’t attend. If you’re looking for interesting vintage photos for your collection you might want to get in touch with him.

© Shayne Davidson and CapturedandExposed.com, 2017-2018. Unauthorized use and/or duplication of this material without express and written permission from this site’s author and/or owner is strictly prohibited. Excerpts and links may be used, provided that full and clear credit is given to Shayne Davidson and CapturedandExposed.com with appropriate and specific direction to the original content.