Short skirts may or may not be a sign of modern depravity, but they registered as a sign of bad luck for Peggy Hudson and her husband, according to reports from Los Angeles. Peggy is now awaiting sentence on a charge of first degree robbery.

Charles Anderson arrived home after a long day at his Los Angeles restaurant, The Red Onion, on the night of March 5, 1928. He pulled his car into the garage, got out of the vehicle and was unpleasantly surprised to discover a man and woman waiting in the shadows for him.

The woman thrust a gun into his ribs and told him to turn out the lights. Once they were extinguished the man ordered Charles onto the ground and tied him up with a piece of rope. Then the couple went through his pockets and robbed him of the day’s profits from the restaurant — $382 cash ($5,640 in 2018).

Before they left the man remarked to Charles, “Guess I’ll have to take your car too. You see I’m an ex-convict and I have to make a quick getaway. Don’t be afraid, though. I don’t want your car and I’ll leave it a couple blocks from here on Reno Street.” And with that puzzling comment, the pair got into his car and drove off into the night.

Charles freed himself and called the police. His car was nowhere to be found. 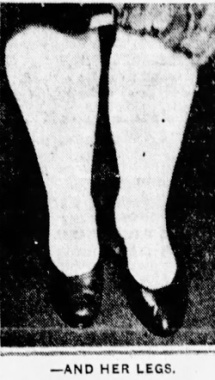 “I didn’t get a good look at her face, but I saw her legs, and I could pick them out any time,” he told the police. He claimed the legs he’d seen belonged to Nora Hudson, better known as Peggy. She was a woman he’d previously employed as a cashier at his restaurant. He also said he thought he recognized Peggy by her voice but he was less sure of that than he was about her legs. He didn’t know her male companion.

Changes in women’s hemlines in the 1920s meant a lot more leg showed than ever before and naturally men took notice. This careful, possibly even lecherous, observation of his female employee’s legs paid off for Charles. It took two months but the LAPD finally located 20-year-old Peggy by tracing her to her home address on Flower Street in downtown L.A. The police took Peggy and her husband, Willard Hudson, a musician, into custody and booked them on suspicion of robbery.

Was there something unusally memorable about Peggy’s legs? If so it’s not obvious in the news photo. 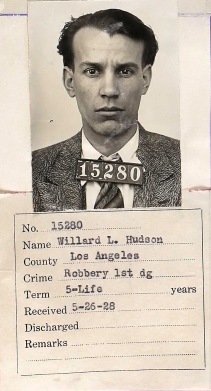 Willard’s incriminating comment about having a criminal record turned out to be true. He’d been incarcerated at Leavenworth Federal Penitentiary in Kansas.

A pair of slick criminals the Hudsons were not. With time to cool off they likely realized they’d been foolish to rob a man who knew Peggy. Then they compounded their mistake when Willard confessed his criminal background to their victim.

They pleaded guilty to first-degree robbery and each was sentenced to five years to life in prison. Willard served his sentence at Folsom Prison and Peggy was sent to San Quentin. She was paroled in August 1931 after she was diagnosed with tuberculosis.

Peggy Hudson must go down in history as the only person ever captured and sent to prison after being identified by her legs.

Leave a Reply to Tokens of Companionship Cancel reply