With her hands burned to a crisp and scarcely an inch of her body that is not frightfully charred Mrs. Mary Mills, commonly known as “Mother Mills,” lies at her home in the tenderloin district, on lower D street, suffering intense pain and with probably but a few more hours to live. “Mother Mills” is over eighty years old and now she is dying from injuries inflicted by a girl called “Gyp,” whom she has sheltered and given such a home as a First street house can afford.

San Bernardino is a beautiful city in southern California, nestled in the San Bernardino Valley — “The Valley of the Cupped Hand of God” — as native peoples originally called it. The city dates to the 1860s, when pioneers arrived in covered wagons. Most of the travelers were male and soon a thriving business in prostitution was established in San Bernardino. For years city officials passed laws to try to control and even eliminate prostitution, but the laws were often ignored. Prostitution was popular with many of the citizens and it also provided an economic base and a “prime source of cash” for years, according to writer Harvey Kahn.

Prostitution also had countless human costs. It played a major role in a horrendous tragedy that occurred in San Bernardino in 1901. 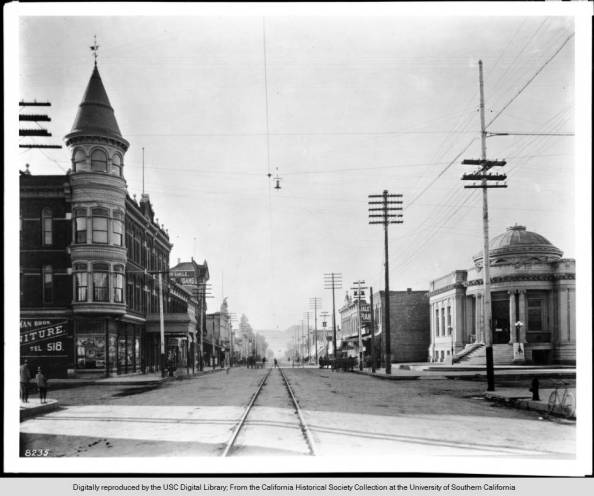 At about 8 p.m. on a sweltering Saturday night in late August, Mary “Mother” Mills ran screaming from an “assignation house” (see note at the end of the story) on D Street. Her head and clothing were covered in flames that were described as “cooking her flesh.” Born in Ireland, she was 76 years old and had owned a number of San Bernardino “sporting houses” over the course of her long career, which was said to date back to the early years of the city’s existence.

Mother Mills collapsed on the ground, writhing in pain. Help arrived shortly, but it was several minutes before the flames were completely extinguished. She was carried back into the house, laid carefully on a cot and a doctor was summoned. It took some time for him to locate an unburned section of her body in which to inject morphine in an effort to reduce her suffering from the burns that covered her body. Due to the extent of her injuries, she was not expected to recover.

The San Bernardino police took Gypsy Adams into custody that night and charged her with the attempted murder of Mother Mills. Gypsy or “Gyp” as she was known, was a middle-aged inmate of the brothel where Mother Mills also lived. She was known for her volatile temper and addictions to alcohol and opium. The other prostitutes in the house tried to prevent her from taking an oil lamp into her room, because she had a history of throwing things when she got angry. They feared that someday, in a fit of temper, she would burn the house down. Instead she apparently had thrown a lighted lamp at Mother Mills and burned her down. Mother Mills succumbed to her injuries the following day.

Gypsy had no lawyer at her arraignment a few days later, so she represented herself. One of the witnesses that day was 26-year-old Bessie Turner, who, according to the 1900 census was the head of the brothel where Gypsy lived. “You’re a dope fiend, ain’t you,” Gypsy inquired of Bessie. “No, I ain’t,” snapped Bessie, who one reporter described as having “blood in her eye, that even paled the rouge on her cheeks.” The women exchanged insults and curses, until finally Bessie grabbed the judge’s gavel and hurled it at Gypsy’s head. It missed Gypsy and landed on the leg of a police officer. However her demonstration of temper and willingness to throw objects in anger did not deflect suspicion for the murder from Gypsy to Bessie. Gypsy was charged with murdering Mother Mills and held for trial.

An African-American prostitute named Kate Parker, who lived in the brothel next door, was the first person on the scene after Mother Mills ran out of the house. She testified at Gypsy’s trial that Mother said “Gyp hit me with a lamp. Look at my forehead,” as Kate ran towards her to help. The testimony was objected to as hearsay and it wasn’t allowed at trial. However the judge allowed in statements allegedly made by Mother Mills about how she had befriended Gypsy when others had spurned her.

Gypsy testified that she had eaten about half a pound of opium and she was so crazed by the drug that she didn’t know what happened the night Mother Mills caught fire.

The jury was convinced of Gypsy’s guilt but was torn between whether it was first or second degree murder. First degree would have meant a mandatory death sentence. They chose instead to find her guilty of murder in the second degree with a recommendation for mercy. She was sentenced to 25 years in the California State Prison at San Quentin.

Born in Louisiana, Gypsy’s age at the time of her trial was reported to be somewhere between 28 and 37 years. No one knew much about her background and she disclosed very little about herself. Her real name was rumored to be Mary DeSilva and it was said that she was of Creole ancestry.

According to the 1900 and 1910 federal census records, Gypsy was born around 1863 in Louisiana to a Portuguese-born father and a mother born in Ireland. No one of that description appears on the 1870 census under the name “Mary DeSilva” or “Gypsy Adams” or any variations of those names. It’s possible her family slipped through the cracks and didn’t get counted or possibly both names were aliases.

Gypsy or Mary or whatever her name was, left Louisiana and wound up in Chicago. Using the name Maria Desylva she married Timothy McCarthy, a man she later claimed was her uncle, in March 1882. She and Timothy had a son, also named Timothy, in 1884. She stated later that her husband was a policeman and he was killed in the Haymarket riot on May 4, 1886, despite the fact no one of that name appears in the Illinois death index for that date. She had another child in 1888, George McCarthy, who only lived a few months. Obviously if her husband died in 1886 he could not have been the father of George. After George died, in 1888, Gypsy put her son Timothy in an orphanage and headed west.

Next there’s an eight year gap in her timeline, until she appeared in the news in 1896 when she was jailed as a “vagrant and lewd person” in San Pedro, California. Immediately after she was released from jail she went to Los Angeles where, under the name Mary Jacinta De Sylva, she married a Michigan native named William Tossell. For some strange reason Tossell worked as both a barber and jeweler. In 1899 he signed up to fight in the Spanish-American War which effectively ended the marriage — Gypsy claimed he’d abandoned her. By 1900 she’d moved to the San Bernardino brothel. She was divorced from William Tossell in 1902.

Gypsy served ten years of her sentence and was paroled in December 1911. A few months later she wound up in the tenderloin district of Carson City, Nevada, where she got so drunk that the police were called. She had violated her parole and was returned to San Quentin. She said that she would rather be in prison, where she was sure of having food, clothing and shelter, than be free but without money or friends. She was released from prison in March 1917.  At that point the trail of her ill-fated life goes cold.

Note: I use the words “brothel” and “prostitute” for clarity but these words were not used at that time the events in this story took place. Instead euphemisms such as “assignation house,” “sporting house” or “resort” were used to for the place and  “soiled doves,” “women of the half-world” or simply “inmates” were the terms for those who worked in the place.