BERKELEY. March 27. — The surgeon’s knife will be used in an attempt to reform Mrs. Jean Thurnherr, the notorious girl burglar. Specialists have declared that the girl, who was injured while disguised as a cowpuncher in Arizona, has never recovered from a blow on her head received while breaking a horse, and that this injury causes her to steal.

It all began in 1903, when 14-year-old Bessie Barclay, later known as Jean Thurnherr, ran away from her Los Angeles home. She went to San Pedro, a community south of Los Angeles, where, disguised as a male, she found work in a bowling alley and then got hired as a cabin boy on a lumber schooner headed for the Puget Sound.

Her family, distressed at her absence, hired a female private detective to search for her. The detective located her in San Pedro before the boat left. She was returned to her father, Henry A. Barclay, an attorney and judge, and her mother, Lily Ward Barclay, an artist. 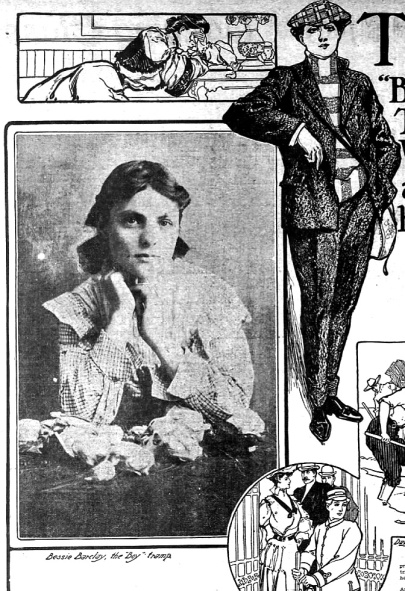 In 1904 Bessie ran away a second time. Again she dressed as a boy and found work as an elevator operator, a newsboy and a cowboy in Arizona. (The Arizona part of her adventures would, in later news reports, be expanded to include tales of tangling with Mexican outlaws and a head injury due to a fall from a horse.) She was located by authorities and returned to her parents but she didn’t stay home long. The next time she ran she went farther — all the way to San Francisco.

Disguised as a boy she worked as a bellhop at a hotel on Kearny Street. There she met a miner from Alaska and robbed him of a purse containing $340 worth of cash and gold nuggets. This time she was arrested and convicted of grand larceny, however with her family’s legal connections, she got off with probation. During her court hearing she claimed that she was adopted and left home because she didn’t get along with her adoptive parents. While she was in jail in San Francisco, her mother, Lily, died in Los Angeles.

If only the law would let me fulfill those duties instead of trying to curb my venturesome spirit in a reform school. There’s no use pretending otherwise — it’s a boy’s life and a boy’s opportunities and above all the wide free life of the mountain ranger that appeals to me most.

Bessie’s father was fed up with her exploits and broke off contact with her. During her arrest in 1909, it was rumored that she was the biological child of her mother, Lily Barclay, but that Judge Barclay was not her father.

Instead of returning home after her release from jail, she remained in the San Francisco Bay Area, under the supervision of a probation officer and of women who worked for various charitable aid societies.

There is no doubt that Mrs. Thurnher (sic) is a natural and more than usually clever criminal. Possessed of a charming personality she makes friends readily and exercises an almost uncanny influence over men with whom she comes in contact. She never seemed to care for their attentions. She was always interested in stories of bold crimes and frequently expressed her admiration of clever thieves whom she read about.

On October 1, 1908, Bessie, using the alias Jean M. Gordon, married Albert B. Thurnherr, a young dry goods store clerk, in Alameda. The couple moved to Berkeley and settled into an apartment near the University of California. On Christmas Day, 1908, Bessie pulled her first burglary at an apartment house close to her new home.

The Thurnherrs moved around Berkeley during their first year of marriage and everywhere they went, burglaries followed. At one point a homeowner returned while Bessie was in the process of robbing the woman’s bedroom. She leaped out the window to the ground, a drop of about 20 feet, and escaped unharmed. The homeowner got a glimpse of her fleeing form (surprisingly she dressed in women’s clothing) and reported to the police that it was a woman they should seek for the burglaries. The newspapers dubbed the burglar “the female Raffles,” inspired by the E. W. Hornung’s fictional gentleman thief, Arthur J. Raffles.

She was arrested several times during the winter of 1909, but the police lacked evidence and she wasn’t charged. By May they were convinced of her guilt and had her followed by detectives. She was arrested on June 11, 1909, at her Berkeley home. The police found numerous items in her home that she had stolen over the previous eight months. She pleaded guilty to 1st degree burglary and was sentenced to one year at San Quentin Prison. Her husband, Albert, stood by her and was reported to be heartbroken by her prison sentence.

Jean/Bessie spent 10 months at San Quentin before being released early for good behavior. She returned to life with Albert in Berkeley, but she didn’t stay out of trouble for long. She was caught shoplifting at a jewelry store in March 1911 — it was the third time she had robbed the same store.

At this point a clever doctor named H. N. Rowell came up with the idea that Jean/Bessie might be cured of her burglary habit by having surgery on her skull. She claimed that she hit her head during a fall while breaking horses in Arizona in 1904. Dr. Rowel believed that her head injury was what caused her seemingly endless lust for crime.

With difficulty Albert found two bondsmen who agreed to pay his wife’s bond so she could be released from jail for the operation. She went to the Fabiola Hospital in Oakland, where a trio of doctors removed a three square inch chunk of her skull. They said it was thickened so much that it pressed on her brain and this was, no doubt, the cause of her problems. Just for good measure Dr. Rowell also put her under hypnosis — he was supposedly an expert — to aid her recovery.

The operation was proclaimed a success. The patient lost little blood and her brain was described as “not injured at all.” The docs sewed up “the tissues” over the wound and then sewed up her scalp and sent Bessie on her way — cured of crime by surgery! “Hers was a case of disease rather than crime,” proclaimed her doctors.

Except that she wasn’t cured. Despite insisting that her urge to steal was gone, in September 1911, she was caught stealing from an office building in Oakland. Given probation, she was arrested again in 1913. Rather than jail she was sent to the Patton State Hospital, an asylum for the criminally insane, in San Bernardino, California. The judge in her case believed she might be suffering from a “dual identity.”

Doctors at Patton decided she was not insane and returned her to her husband, Albert, who had moved to San Francisco. In October 1913 she reoffended but the judge decided to release her from jail because she was ill and he hoped going home would save her life.

Albert was married to someone else by 1918. It’s possible Bessie died of whatever she was suffering from in 1913, though no death record was located for her. (Having a piece of your skull removed and living without it would be no picnic, especially in the days before antibiotics). She may have moved on to commit more crimes under an alias or possibly she assumed a male identity. Whatever she did, she left her mark on the history of quick quack cures for crime.